Cross #: 19.3149
Catherine
Clearwater, FL
My cross was recently birthday-gifted to me by our oldest son and his wife, Thomas and Alexandria.

I believe the mustard seed cross is an homage to my late husband, Robert, who died September 10, 2018.

A vibrant, healthy man all his life, Bob had a complete knee replacement in January that same year. He was so fit and healthy, he rehabbed at home and was walking a mile daily within two weeks. Shortly thereafter he became very ill. Long story short, after several hospitalizations, multiple tests, many specialists studying his case and two months, it was determined that the trauma of the surgery had activated a dormant, very rare blood leukemia caused from the toxic waters at Camp LeJeune Marine Corps Base in Jacksonville, NC. U.S. Marines stationed on base there during 1953-1987 were exposed to highly poisonous toxins from the drinking, bathing and Bay waters. Nearly one million military personnel and their families were exposed to this worst case of poisoning in the United States. Already, nearly 400,000 have died from a variety of illnesses the military has recognized as being caused by these waters. He was rendered 100% totally and permanently disabled by the military and spent his remaining months going through brutal chemotherapy and weekly blood transfusions. He was a fighter until the very end.

I have faith I will see him in some form someday and I feel that he is with me each day I awaken. I am visited daily by cardinals in my garden and I honor his memory by living the good, positive life he would want for me.

We were married 52 years and were true soulmates. Bob left me with a legacy of three sons, 13 grandchildren and two great-grandchildren, all of whom have surrounded me with much love and attention. 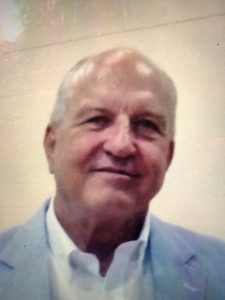