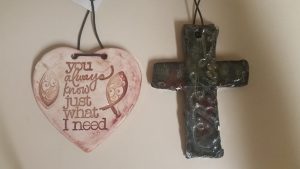 Cross #: 15.3941
Cathy
Palm Harbor, FL
I have a cross that says “Believe.” It fell off its hook and the bottom broke off under the arms of the cross. I met my friend Jane for lunch that day and told her what happened. She shared that she just received a heart that says “You always know just what I need” and she gave it to me. Amazing! I was relieved to have a replacement to keep me encouraged. It was during my job search in early 2015 and it really bothered me that my cross was damaged. I felt the message was that I wasn’t believing enough, and that my faith was broken. During the next several weeks I did a lot of soul searching and praying for the next job. I even prayed that I would try for a particular job that I didn’t really want, but if that was what God wanted me to do, then I would apply. So I did and I was called for the interview. Sitting in the interview with two people, I was asked about my resume and background. What was my intention with this interview? Or was I really trying to get a job that matched my resume? I was nervous that I was going to really mess up my chances of getting a job. But I was honest and said that the job on my resume was my long term goal. The interviewer said they had positions open for that type of job and would it be okay for him to give my resume to that other department? I said yes that would be great. The interview quickly ended. The next day, I received a call for the other interview and soon received a job offer. Four years later, I am still going strong in that job. So yes, God always knows what I need.