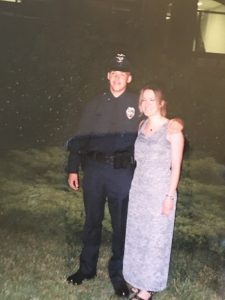 Cross #: 18.1069
Billie
Haddon Twp NJ
On July 8, 2009 I was upstate at a medical hearing in support of my pediatrician that helped me raise my five children. At that time my eldest daughter Brittany was 33 yrs. old, residing in CA, my son T.J. was 31 yrs. old, happily married, a police officer and fireman, residing a few blocks away, my next daughter, Caitlin was 23 yrs. old, away at college, my next son, Timothy was 21 yrs old living with his girlfriend and my youngest daughter, Siobhan was 17 yrs old, residing at home and in high school. I received a phone call from T.J. while at this hearing and he was questioning his relationship with his wife because she did not want children, which he knew before they were married, and he wanted children. I reminded him that he knew that and he should talk to her. He was overtired from working non-stop and not sleeping well. I told him to also stop by our house and talk to Dad. He called four more times and we talked and I said I would stop by and see him when I got home. I finished the hearing and called my family to let them know I was on my way home. I could not reach any of them. Which was not unusual. I thought I would stop by T.J.and Nicole’s and see how they made out talking. When I pulled into the driveway, their neighbor on the right side of their house ran out to my car screaming, “didn’t you hear”, didn’t anyone call you”. The neighbor on the left who worked at the prison jumped into my car and asked me to move over and he will drive me to Cooper Hospital that T.J. was shot. I asked what happened and he said T.J. shot himself and when I asked if he was alive, John just kept saying let’s just get there. When I reached Cooper Hospital there were at least 50 police officers there all crying and my husband and youngest daughter came up to me crying saying T.J. died. I went in and asked to see him, I cried and prayed for strength for my other children while consoling T.J.’s wife who was blaming herself. I constantly said, “no it is no one’s fault but T.J.’s”.  The next week, while all the firemen and policemen gave him a beautiful tribute, that he really didn’t deserve, we cried and all supported each other as we had our meltdowns, told T.J. stories, and dealt with our pain. That is my cross to bear everyday I wake up and realize he’s gone. We all keep him in our conversations, we come together for his birthday. We keep his memory alive. My Iove of my family and my friends constantly helps me through each day. However, I wait for the day that I see him again. He was a great husband, son, brother, friend. He loved everyone, was a comedian, and loyal to his brother fireman and police officers. Life has not ended but is changed for me. I stay close with my other children and support suicide prevention for police officers. This seems to be a common problem for this profession. Here is an image of my son.